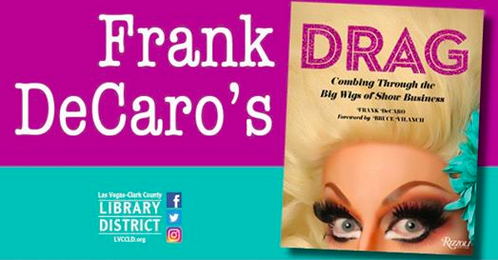 Since the beginning of time no other art form has had such a unique influence on pop culture as drag has. Moderated by Frank DeCaro and featuring a panel of local drag artists, including Larry “Hot Chocolate” Edwards and the Fabulous Edie of Zumanity, hear from the Las Vegas insiders who lived through drag’s incredible pop culture transformation.

DeCaro is best known for his 12 years as the host of the daily national satellite radio program The Frank DeCaro Show, and his much lauded, six-year stint as the flamboyant movie critic on The Daily Show with Jon Stewart. DeCaro has spent the last four years touring America as the opening act for Lisa Lampanelli.

A former columnist for both The New York Times and Spy magazine, he frequently contributes to the Styles section of The New York Times. His books include The Dead Celebrity Cookbook, Christmas in Tinseltown, Unmistakably Mackie, and the pioneering queer memoir, A Boy Named Phyllis.

A book sale and signing follows. Presented in partnership with Rizzoli New York.

Free and open to the public. Seats are available on a first-come, first-served basis. For more information, call 702.507.3459.