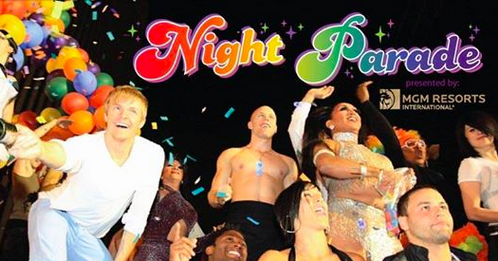 Join us in downtown Las Vegas for the most glamorous, glittering spectacle ever created by the gay, lesbian, bisexual, and transgender community of Southern Nevada. This year’s PRIDE Night Parade, led by our Parade Grand Marshal, features Las Vegas’ gay and straight business community, nonprofit organizations, LGBT service agencies, civic groups, and churches as well as SNAPI’s royalty. Don’t forget to come early to grab the best spot and pre-party with PRIDE (at the corner of 4th Street & Bridger Ave.) Then, when the parade ends, make sure to keep the party going at the official after parade party.

Parade Pre-Show at the Main Stage begins at 6:45pm on October 19, 2018 and is immediately followed by the Parade at 8pm
Visit the City of Las Vegas Website for Downtown Public Parking

The parade route begins at Gass Ave. and heads north along 4th Street to Ogden Avenue. Secure your spot where the action happens early. The main stage is at Bridger Avenue just two blocks south of the Fremont Street Experience.

This year Cox is proud to support Southern Nevada’s GLBT community as the official broadcast partner of the PRIDE Night Parade. Party all night at the parade and catch all the fun AGAIN during one of many rebroadcasts on Cox Channel 96 www.cox96.net.

There is a competition for parade entries (find the categories and judges here) vying for trophies for best walking units, vehicle units, and floats. Judging takes place at the grandstand so support your entry with thunderous applause as they strut their stuff for our celebrity judges. Parade entry forms will be accepted until 6pm on September 28, 2018 via the PRIDE Parade Application Page.