Equality Nevada is a non-profit charity and advocacy organization. We fight for civil rights, using all of our resources to secure full equality for the lesbian, gay, bisexual, and transgender (LGBT) community.

We advocate achieving fair treatment and equal opportunity for all Nevadans regardless of their sexual orientation, gender identity or expression.

Equality Nevada focuses on youth, ensuring that laws are drafted and passed to protect them, provide funding and resources to low income families to help make possible that all youth can achieve their goals and dreams. One of our signature programs is the creation and maintenance of gay straight alliances which serve to build trust and open dialog with our allies to ensure the reality of inclusiveness and equality for all.

Equality Nevada builds a social and political voice for the LGBTQ communities of Nevada. We work with leaders from all around Nevada in an intentionally collaborative, inclusive, diverse, and respectful way.

We aim to advance LGBTQ protective policy, identify and organize LGBTQ leaders, volunteers, allies and organizations. We identify and promote like-minded candidates who will work to support the various needs of our diverse community throughout the state.

We provide leadership training’s, volunteer opportunities, and sponsorship opportunities to engage and grow the LGBT and straight-ally community involved in this fight.

We are a 501(c)3 non-profit organization funded through donations, sponsorships, and grants. 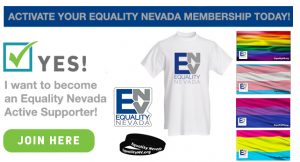